Students from around the state of Michigan are invited to re-imagine Cass Avenue in Detroit's Cultural Center through a second Student Design Summit, which kicks off at 6:00 p.m. on January 22 at TechTown Detroit.

Cass Avenue serves as the front door for the main branch of the Detroit Public Library, Wayne State University, and many restaurants, apartments and businesses. Currently enrolled high school, college and university students will be invited to explore the role of libraries and public universities in the 21st century and come up with cutting-edge tactics, prototypes and concepts to help these institutions better serve their communities and build connections across and along Cass. The summit builds on the success of the initial Student Design Summit that was connected to the DIA Plaza | Midtown Cultural Connections international design competition-now formalized as the Cultural Center Planning Initiative, an 18-month conceptual planning phase for the district. 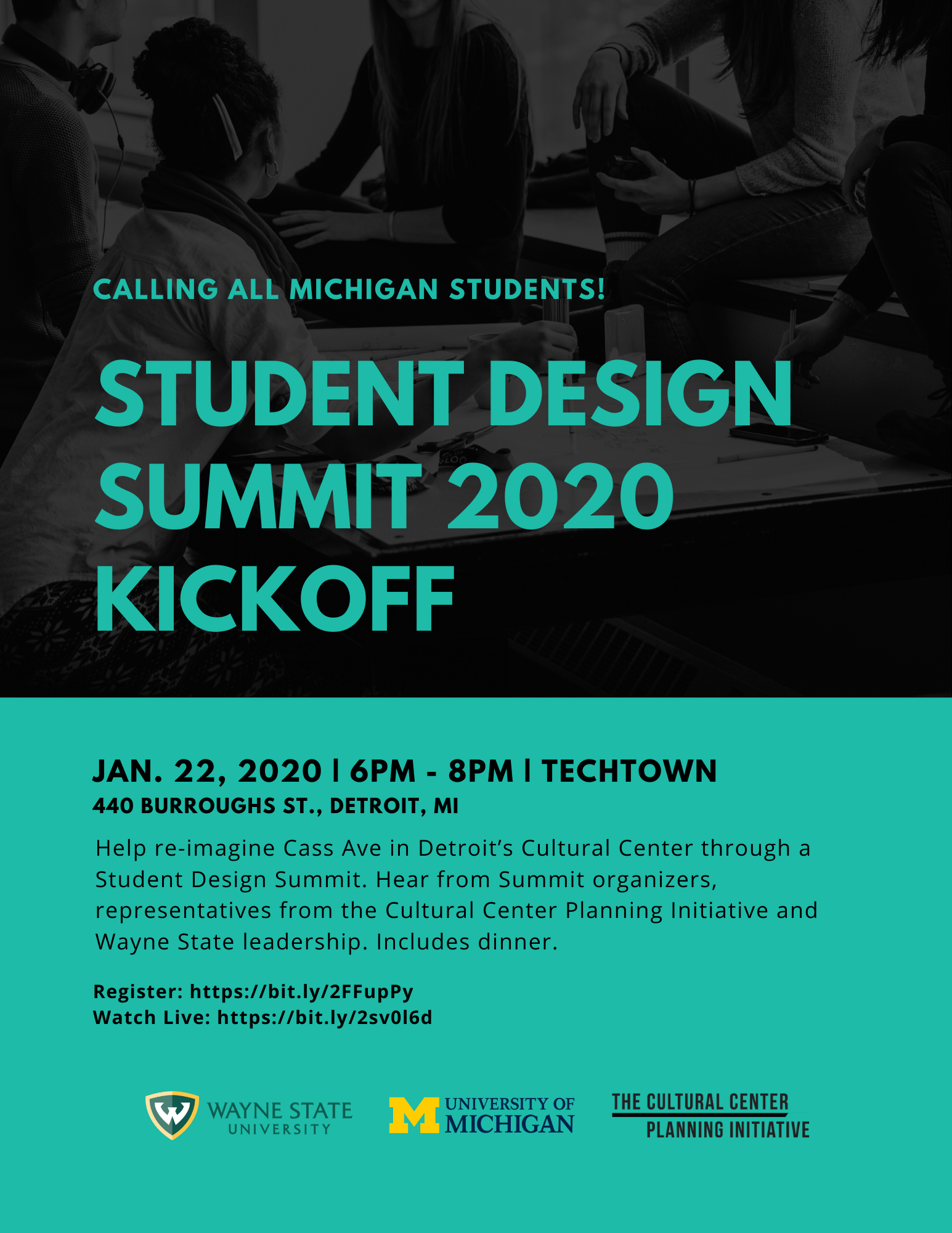 The summit is being jointly led by the Michigan Engaging Community through the Classroom Initiative at the University of Michigan, Wayne State University and Midtown Detroit, Inc. Collaborators include the Detroit Public Library, Design Core Detroit and the City of Detroit.

"The University of Michigan is honored to continue our involvement in the evolution of Detroit's Cultural Center," said Valeria Bertacco, vice provost for Global Engagement and Interdisciplinary Academic Affairs at Michigan. "Fostering ideas on how libraries can better connect with the neighborhoods they serve is exactly the kind of authentic challenges our students seek."

Following the January 22 kickoff, two additional sessions will be offered to help students understand site issues, stakeholder ideas, needs and visions, as well as to get input from design professionals to help make their project stand out. These sessions are planned for Feb. 19 at the Detroit Public Library and March 18 at Co.act Detroit. Times and locations can be found on the Student Design Summit webpage.

"Wayne State is excited to again be a Design Summit partner," said Ned Staebler, vice president for economic development at Wayne State. "The University is actively working on creating inviting public spaces on campus and building connections between our campus and our neighborhood. We look forward to engaging students from a broad range of schools and disciplines in designing the future of this area."

"It's going to be these students' district and city in the future," said Susan Mosey, executive director of Midtown Detroit, Inc. "This Design Summit invites the next generation to get invested in its revitalization."

When all three sessions are completed, participating students, and teams of students, wil submit a two-minute video along with a board that explains their ideas. Team size, formation and background is up to the students.